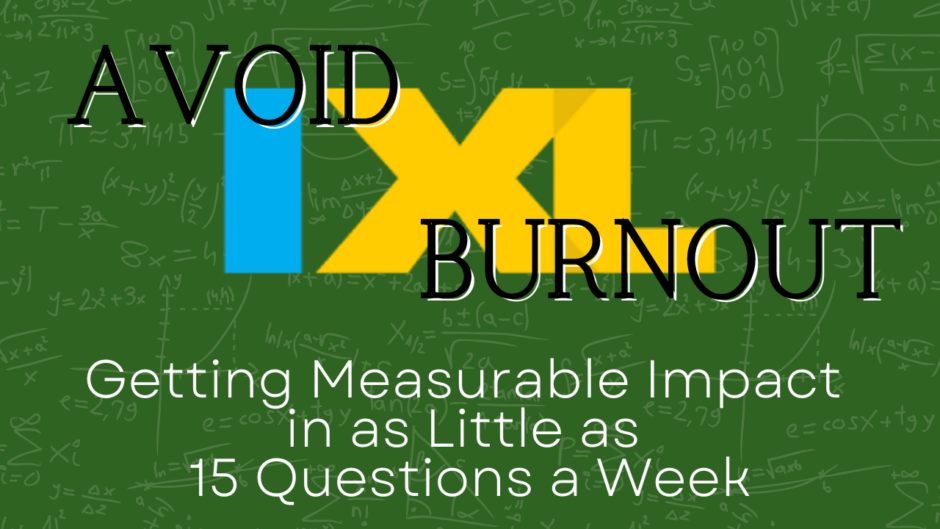 A bit of heavy reading behind the “IXL Effect”

The IXL Effect is a well-known phrase in the IXL community that refers to the impact that IXL can make on student proficiency, specifically when comparing schools that use IXL to those that do not use IXL. IXL conducted research that explored IXL usage across the entire state of Indiana. By examining a large number of schools, they were able to quantify the impact of IXL Math and IXL English Language Arts on school performance when measured by the Indiana state exams. In an effort to not oversimplify the results of the study, you can read IXL’s summary of findings below:

“Analysis of the data showed that IXL produced positive and statistically significant effects on school performance in both math and ELA, indicating there is a high probability that similar schools using IXL would achieve similar results. The IXL effect was found to be larger for low-income schools and urban schools.”

“The analysis also showed a positive correlation between IXL usage and school performance. In particular, IXL schools with more than 15 questions answered per student per week outperformed IXL schools with fewer than 15 questions answered per student per week by 8.08 percent in math and 4.07 percent in ELA on schools’ 2016 ISTEP+ percent proficient. One additional skill mastered per student, per week, was associated with an expected 7.42 percent increase on a school’s percent proficient in math and a 6.63 percent increase in ELA.”

The results demonstrate that with as little as 15 questions per week, students can see a measurable impact on standardized test scores.

Ideally, how much time should we spend on IXL?

✓ Already meeting that goal? Aiming for 60 or 130 questions per week has been shown to have an even bigger impact on student success.

Burnout on IXL is real: Ways to Encourage IXL, Without Causing a Riot, in the Classroom

Helping students set reasonable goals helps to eliminate students reaching their frustration limit and helps to keep kids engaged in their practice. Below are five ideas to help encourage IXL in your classroom:

Set Reasonable Goals: Achieving mastery is always possible, but not completely necessary to see growth. Often, aiming for a smart score of 100 leads students to their frustration limit. Consider encouraging students to stop anytime after they’ve reached a smart score of 80 or more. Learn more about smart scores with a quick video.

Aim for Proficiency in at least 1 skill per subject, per week. Keep an eye on the live classroom when students are practicing so you can pinpoint students that are reaching proficiency, and those that may need a quick intervention before they get frustrated.

Use the 80/20 rule: Have students practice a skill until they reach a smart score of 80 or until they’ve spent 20 minutes practicing. If students have not reached proficiency in a skill in 20 minutes, it may be time to take a break, ask for help, or come back and practice another day.

How are you finding ways to use IXL in your classroom/building?
Lets us know in the comments below!

Ideas gathered from IXL Official Blog: How Much Time Should my Child Spend on IXL

Looking to engage with a Leaderboard? Learn more from Level up learning with school-wide Leaderboards

This site uses Akismet to reduce spam. Learn how your comment data is processed.